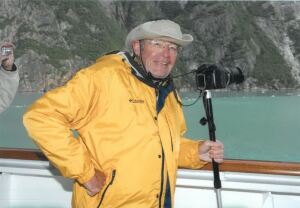 John Albert Davis Jr (Jack) was born in Pocatello, Idaho on April 22,1936 to Cleo  Alberta Davis and John Albert Davis. The family moved to Ottawa, Kansas in 1943. Jack graduated from Ottawa High School in 1954. Earning a four year Summerfield scholarship at University of Kansas. Jack graduated with a B.S. degree in Chemical Engineering in 1958.  Offered a National Science Foundation Scholarship for graduate studies, Jack earned a M.S. in Chemical Engineering from University of Michigan in 1959 and returned to University of Kansas earning a PhD in Chemical Engineering in 1963. He married Nancy Kibler Davis on August 20, 1960. Upon graduation, he accepted a position as a research engineer at Marathon Oil Corporation’s Research Center in Littleton, CO where he authored numerous technical and professional society publications and 16 U.S. Patents. Son’s John Bradley Davis and Christopher Forrest Davis were born at this time.

During his 32 year career at Marathon, Jack was promoted to several managerial positions including Manager of the Liquefied Natural Gas in Findlay, Ohio and Manager of the Natural Gas Division in Houston, TX. Jack was also appointed Director of Marathon’s Petroleum Technology for Research and Technology Development in Littleton, CO from 1986 to his retirement in 1994. He was also inducted into both the Hall of Fame of Chemical Engineering at the University of Kansas and the Hall of Fame of Ottawa High School. Following retirement from Marathon, Jack served on several advisory boards including the advisory council at University of Kansas for Chemical engineering and Board of Directors for Taco Johns International.

So?...Who was this small town boy made good?

A beloved husband, father, grandfather, uncle and friend.
Dedicated member of his church, Littleton United Methodist, serving on the Board of Trustees and Finance Committee, building projects for the church, service projects in Honduras and Hungary.
Photographer of the beauty of the earth, love of animals and scenery.
World traveler – visiting over 100 countries.
Woodworker – built fine furniture for his home, his family and many community projects including 3 large pieces for a former church.
Avid hiker, camper, skier, hunter and fisherman

A celebration of life will be held at Littleton United Methodist Church, 5894 S. Dentura St. Littleton, CO 80120. Friday January 21, 2022, followed by a reception in Fellowship Hall.

Memorial donations may be made to Littleton United Methodist Church or the charity of your choice.

Please join the service for Jack via livestream at http://lumc.tv/index.html